On the 13th and 14th May 2010 was held in Forli, in the prestigious Museum of San Domenico, the first meeting of the Welfare Commission of the Adriatic Euroregion. The working agenda for the coming months has been defined.

The Adriatic Euroregion is the Association of regions bordering the Adriatic, which has intensified the cross-border relations, identifying common solutions to major problems in the area and to enhancing the development.

The meeting was organized by the Emilia Romagna Region and the Municipality of Forlì, with the assistance of the Province of Forlì-Cesena, chaired by Davide Drei and Patrick Leech. Besides, among others attended: Sonja Grozic Zivolic representing the Presidency of the Euroregion; Georgios Lychnos representing the Prefecture of Thespotia who chairs the Commission Welfare Euroregion, Teresa Marzocchi Councillor for Social Policy and Enrico Cocchi Director General Planning and European Affairs of Emilia Romagna, Giovanna Andreola, Managing Authority IPA CBC Adriatic, representatives of Italian regions Veneto, Marche, Abruzzo, Molise and Puglia regions of representatives of the Eastern Adriatic Counties, Istria Sibenik Dubrovnik, Kotor (Croatia), and the Canton of Hercegovina and Neretva (Bosnia Herzegovina), Vlore (Albania) Trespotia (Greece), the Brussels representative of the Adriatic Euroregion Di Gregorio, Stefania Servidio representing Interregional Agency for Cooperation and the President of ERVET. Furthermore, as invited guests participated the Director General of the Ministry of Social Affairs and Labour, Councillor of the Minister for European Integration, Director of the Ministry of Public Works and Ente Nazionale home in Albania ; the municipalities of Tirana, Durres, Vlora and Shkodra (Albania), the City of Nicsic (Montenegro), the towns of Ancona and Reggio Emilia, the Province, the University of Bologna, the representative of the Third Sector Forum Emilia Romagna, Councillors and local Councillors, business home ACER Forlì-Cesena and Ancona ERAP, CISE, AICCON.

The work session was accompanied by three paralell working group on “Promotion of a common European welfare state”, “Empowerment and strengthening of capabilities”, “Quality urban and welfare of the community”.

These themes were selected from those treated in the ‘Social Agenda for Adriatic Area “prepared by the Emilia Romagna Region and the Municipality of Forlì in the weeks before the meeting, which is the starting point of the comparison subjects on the Adriatic Euroregion welfare.

The Commission, at the end of the work approved a program of activity, using a special temporal logic scheme through the recognition of existence and further development of proposals that emerged from the groups.

The next meeting of the Commission will be held in Mostar in November 2010. 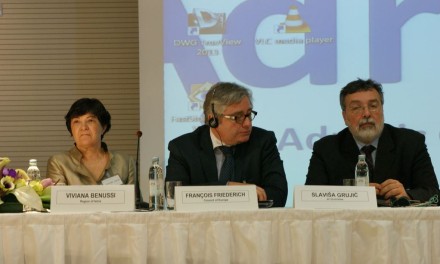 Regional authorities, a conference in Pula on 18th april