The two days of 8 and 9 May 2013 were very important for the project Adrigov, Operational Plan for Governance in the Adriatic. In the afternoon of May the 8th, in Valle (Istria), was held the Institutional Technical Committee and the PMU (Project Management Unit) to discuss the outlook of the project, develop a strategic plan for the next 6 months and deal with issues related to budget management and optimization of costs.

The following day, May the 9th, in the medieval castle Bembo in Valle, was held the opening ceremony of the Training Center for International Cooperation and EU policies. The center was established in collaboration with the University of Pula and the Association of Local Democracy Agencies (ALDA). To welcoming the public there were Oriano Otočan, Minister for International Cooperation and European integration of Istria, Renato Cianfarani, Consul General of the Republic of Italy in Croatia, the rector of  Pola University George Dobrile Robert Matijašić and the President of Istrian County, Ivan Jakovčić. The Center will instruct citizens about European issues and push the business sector, as well as the public, to know how to better manage procedures to tap into EU funding. The inauguration was held in conjunction with the European Week in Istria, then the President of Istria Region, Ivan Jakovčić, welcomed the guests of the opening ceremony highlighting how the Istria is ready for accession to the EU, on July the 1th, 2013. An important moment of the ceremony was the presentation of the project AdriGov by Ivana Dragisic of the Administrative Department for International Cooperation and European Integration of Istrian County, which was followed by a panel discussion entitled “The role of the regions in European Union”. The round table was attended by Pierpaolo Nagni, regional Councillor for Transport and Infrastructure of Molise Region, Francesco Cocco, Secretary General of Adriatic-Ionian Euroregion, Antonella Valmorbida, Director of the Association of Local Democracy Agencies (ALDA), James Franco, of Friuli-Venezia Giulia Region, Diego Vecchiato, Head of International Relations of the Veneto Region, Elena Kangjera (Agency for Regional Development of the Dubrovnik-Neretva County). Topic under discussion, the regional perspectives in development policies in Europe. 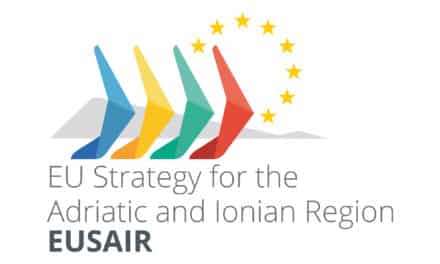